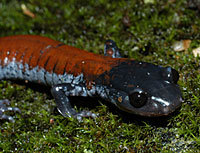 A professor at Iowa State University says climate change is to blame for a certain species of salamanders in the eastern U.S. that are shrinking in size. Dean Adams co-authored a study published this week in the journal Global Change Biology.

He says various Appalachian salamander species have lost an average of 7-percent of their body size in recent decades as the climate they call home has gotten hotter and drier. “As it’s getting warmer and drier, that’s putting more demands on these animals and their metabolism increases. As a result, they have few resources to devote to growth and so they end up being smaller,” Adams says.

Salamanders’ permeable skin makes them particularly susceptible to changes in their environment, according to Adams. Many species of salamanders, which densely populate East Coast forests, could now be at risk for extinction. “They’re a major component of the food chain. They are major predators of invertebrates and small insects,” Adams says. “So, a reduction of these salamanders would have consequences up and down the food chain.”

Salamanders have a lifespan of about 15 years, but Adams studied changes in the animal’s body size over 55 years. He looked at thousands of salamander specimens that have been preserved at the Smithsonian Institution. “Without these museum resources, this sort of work can’t be done,” Adams says. “There is no way to compare what is going on today to the past if you don’t have an actual record of the past.” Adams is a professor of ecology, evolution and organismal biology at ISU.