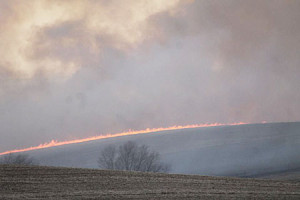 Rain has been falling across much of the state today, a blessing after a series of wildfires sprung up Wednesday. One of the largest, sparked by a resident who lost control of a trash fire, charred 320 acres of farmland in Warren County, south of Des Moines.

The smoke slowed traffic on Interstate 35. The cause of a massive grass fire last night in western Iowa is unknown.

Crews responded to another fire just after 5:30 p.m. in rural Shelby County and Irwin Fire Chief Lynn Gaskill says he knew immediately it would be a struggle. “With the wind conditions…and the size of the fire, we knew we had our hands full and it was going to take a lot of man power to knock it down,” Gaskill said.

Fire crews from four towns were on scene for over 4 hours and were called back later in the evening for a flare up. No one was injured and no buildings were damaged.

High winds, with gusts over 50 miles an hour, were a huge factor in the fire. Gaskill said his department hadn’t previously experienced those 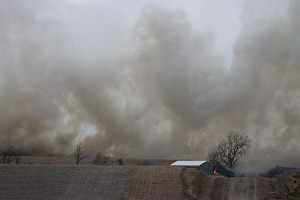 Heavy smoke from the fire in Shelby County.

kind of conditions. “Not during a fire we haven’t, that was pretty strong. You couldn’t hardly stand up,” Gaskill said.

Roads in the area were closed and as a precaution, 14 residents were asked to evacuate to a shelter in Harlan. Gaskill credits farmers for helping bring the blaze under control. “We had four farmers come in with tractors and discs. That was a big asset,” Gaskill said. “I don’t know if we could have gotten it stopped without them.” The fire torched over 300 acres of land.