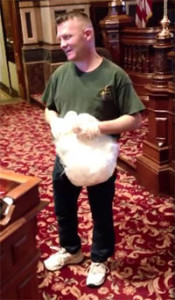 A custodian who’s worked at the state capitol for 16 years has won the “John C. Culver Public Service Award” for how he does his job.

“We’ve never seen him walk. He runs everywhere,” said Ray Walton , who used to be his boss. “He’s so courteous and he’s so thoughtful and he wants to do every single things to help people. He’s just an absolutely wonderful human being.”

Randy Wallace is the Iowa Senate’s housekeeper, emptying every garbage can, dusting, polishing the ornate brass fittings that decorate the Senate chamber. He credits his grandparents for his approach to the job.

“The old values, they made sure that stuck with me,” Wallace said during an interview with Radio Iowa on a work break arranged by his new boss. “It doesn’t matter what neighborhood I grew up in or anything else. It just matters what’s inside.”

Randy — and nearly everyone who works in the statehouse knows his name — is married and the father of five kids.  His old boss had hoped the $1,000 prize that came with last night’s award would be a boost to Randy’s family.

“And the fact that he’s giving away that money is such a tribute to the character and the quality of the person he is,” Walton said. 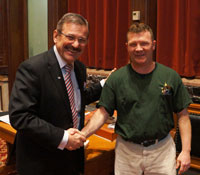 “I was in an elevator with a little kid that was in a wheelchair and I prayed to the guy upstairs, if I could help somehow,” Randy said. “And then things came together and with the award and everything and I thought that’s a good place for it to go.”

Randy was given an engraved chrystal bowl last night at an awards ceremony at Simpson College.  Randy brought it to work this morning, gave it to his new boss and asked him to find somewhere to display it because — in Randy’s words — “this is a team effort.”