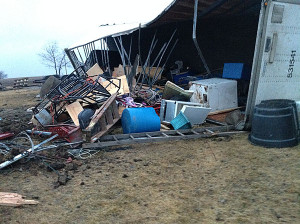 Debris left over from a tornado in Clarke County.

Iowa’s first tornado of 2014 touched down Thursday afternoon in rural Clarke County, south of Osceola. No injuries are reported but the strong winds did damage, tearing down tree limbs, knocking down power lines and causing some structural damage to a homestead.

Jeff Johnson, the warning coordination meteorologist at the National Weather Service, says it may’ve been small, but it was a twister. “Based on the radar data and some eyewitness accounts and then some damage that was reported, we did have a brief tornado,” Johnson says. “The eyewitness report said it lasted roughly a minute.”

The funnel cloud touched down in south-central Iowa and became a tornado around 4:30 P.M., though its duration and scope was limited. “Basically, we had a Morton building that was damaged and damage to someone’s home and the winds were consistent in the range of EF-0 or EF-1 on the enhanced Fujita scale,” Johnson says. “That would put us around 90 miles-an-hour for wind speeds.” 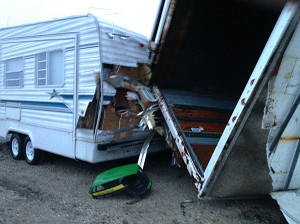 Damage from the first confirmed tornado this spring.

This is the first confirmed report of a tornado in Iowa this year and the first in nearly six months. “The last time we had tornadoes in Iowa was last fall,” Johnson says. “We had a very active fall actually and on October 4th in northwest Iowa, we had several tornadoes.”

This is Severe Weather Awareness Week in Iowa, an event that’s highlighted by a statewide tornado drill that was held on Wednesday. It’s a time when Iowans are reminded about the sometimes-violent weather that comes with the arrival of spring. “It’s not a coincidence that we have it during this time of year,” Johnson says, “although we usually like to have the week out of the way before we actually get the weather, but Mother Nature seldom cooperates. The irony there is that the tornado came a day after the tornado drill.”