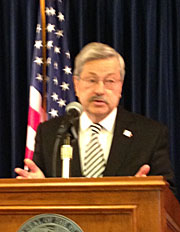 Governor Terry Branstad says there was no “master mind” who told a dozen of his state agency managers to pay fired state employees confidential settlements — and the governor says he cannot identify any program cuts that might be linked to the more than half a million dollars in lump sump payments made to those workers.

“People can make all kinds of accusations, but the truth is I know my responsibility as the chief executive,” Branstad says. “I don’t know every detail that occurs in state government. When I become aware of it I then try to get all the facts and then make an appropriate, thoughtful decision in the interest of the people and the taxpayers of this state.”

Last week Branstad issued an executive order banning future confidential settlements with fired state workers. Branstad today said when he took office in January of 2011, he made this clear: “We indicated to all department heads there would be no money for salary increases. They’d have to eat that out of their budgets. There’d also need to be to significant restructuring of government to reduce its size and cost so that we could live within our means.”

And, for example, Branstad said the $167,000 his Department of Administrative Services agency director paid to three laid off workers so they wouldn’t publicly discuss their dismissals came from salary savings that came from reducing the overall size of the agency’s workforce. Last week Branstad said it was too late in the 2014 session for the legislature to change state law that prevents disclosure of the reasons state employees are dismissed. Today, Branstad asked legislators to take that step.

“These individuals who may be dangerous or violent can then be rehired by another unsuspecting employer that doesn’t know that information,” Branstad told reporters this morning. “The public has a right to know that and so that’s something that I’m committed to…The legislature’s in session. They have an opportunity to do that.”

Branstad told reporters there are “a lot” of  state workers who’ve been accused of elder abuse, child abuse and sex abuse.

“Now let me also say there are a lot of good people that work for state government. We’re talking about the exceptions here,” Branstad said. “There are just a lot of dedicated people that work hard every day to deliver services and I want to make it clear I respect and appreciate all of them, but I also think that when we do have these rare instances of misuse or inappropriate actions and people are dismissed, the public has a right to know that, too.”

The legislature’s Oversight Committee is scheduled to meet this week to hear testimony from fired workers who received the secret exit pay as well as some of Branstad’s top aides.