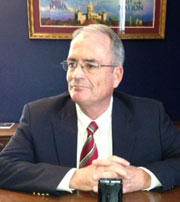 The Republican Party of Iowa has a new chairman who vows to raise more money, register more Republican voters and maintain the first-in-the-nation status of Iowa’s Caucuses.

“I’m kind of excited, folks,” Carroll said in a speech to the committee immediately after his election. “I know that people have differences. There’s conflict. That just goes with it. Happens in my family, so I would expect it to happen in a big family, but at the end of the day there’s nothing like hard work (and) some good, compelling goals ahead of us to put our differences behind and see that we have a good Republican year this coming November.”

Carroll, who lives in Grinnell, served in the Iowa House for a dozen years, and now that he’s the GOP’s chairman he’s resigning from his current job as a lobbyist for “The Family Leader” — a conservative Christian group. A new co-chairman of the Iowa G-O-P was elected Saturday, too, and he is a leader of the Iowa Faith and Freedom Coalition — an off-shoot of the Christian Coalition. A few members of the party’s governing board had hoped to delay these leadership decisions until a new state central committee is assembled after the state convention in June, but Tamara Scott, Iowa’s Republican National Committeewoman, pushed for Carroll to take the chairmanship now.

“I would hate to try and do the work we have ahead without him,” Scott said.

AUDIO of Carroll’s nomination and election, 10:00

Carroll intends to ask the new group of state central committee members who take over this summer to keep him on as party chairman, but he told reporters he understands there has been an effort by Governor Branstad’s campaign to “take back” the party.

“I just intend to do the best job I can from day to day and let the chips fall where they may,” Carroll said Saturday.

Carroll supported Branstad opponent Bob Vander Plaats in the 2010 election. Carroll, who now describes his relationship with Brantsad as “cordial”, told reporters he’ll “be looking for every opportunity” to build party unity.

“Obviously we’ll be careful about any disagreements with Republicans,” Carroll said. “At this point we’re interested in uniting the party around a cohesive effort towards November. It sure would be nice to wake up after the November election and see that the U.S. Senate and the Iowa Senate are controlled by Republicans.”

Carroll said his immediate goals are to organize well-run district and state conventions. Carroll will retain the part-timer, the intern and the two full-time staffers hired by Spiker, the now-former state party chairman who comes from the party’s libertarian wing.