An Oscar-nominated documentary about the hospice program at the Iowa State Penitentiary airs tonight on HBO. Filmmaker Edgar Barens spent six months in the Fort Madison prison to shoot footage for “Prison Terminal: The Final Days of Private Jack Hall.”

In an interview with Radio Iowa, Barens says the film follows the 82-year-old World War Two veteran who was serving time for murder and the inmate-volunteers who cared for him as he died. “My point of making this film was saying, listen, this is a huge problem,” Barens says. “There are hundreds of thousands of people that are going to die in prison each year and if we’re not going to have commutations so they can die with family members or outside of the prison walls, this hospice program is the next best thing.” 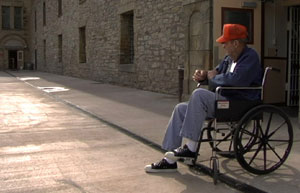 The prison hospice program at Fort Madison is one of only 20 out of some 1,800 prisons nationwide. Barens says the program has a profound impact on the lives of the inmates, both those who are nearing death and those who find some solace in caring for inmate-patients.

“This is a no-brainer, this is not a bank buster,” Barens says. “These programs are absolutely affordable if not free and we need to implement these across the country. I think we need to stop the pain. I know these people did some very violent things, some of them did, some of them are in prison and they just get sick, just bad timing. I think there’s families on the outside that are reeling also because their loved ones are dying — badly — on the inside.”

The inmate who was the subject of the documentary is a study in tragedy. Jack Hall fought in some harrowing battles in World War Two and was taken as a prisoner of war. He was never treated for what we know now as Post Traumatic Stress Syndrome and became an alcoholic. Hall’s son committed suicide in the mid-1980s while on drugs and Hall confronted the drug dealer who sold his son the drugs — and killed him — which sent him to prison for his final 21 years.

Barens says Hall was cantankerous but very likeable, which made it a very personal, challenging film to shoot. “I got to know Jack over six months, I mean, we hung out every day for 12-15 hours, so being there when he passed away was extremely emotional,” Barens says. “I had the benefit really of having a camera in front of me and worrying about technical things so I was able to somewhat pull myself away from the reality of the moment.”

As he was shooting the 40-minute documentary, Barens says he knew he was getting some remarkable footage and an incredible story, but he says he never dreamed he would be nominated for an Oscar in the short documentary category. He took his mother as his guest to the star-studded Academy Awards ceremony earlier this month in Hollywood.

The 53-year-old Barens, who lives in the suburbs of Chicago, says when the envelope was finally opened and he learned he didn’t win, he was “crestfallen.” “When they didn’t read my name or the film’s name, yeah, I was kind of kicked in the gut,” Barens says, “but then I started realizing there are absolutely, fantastically talented people there that did not get the Oscar either, so I was in good company.”

Barens cashed in his 401K retirement fund to buy the camera he used to shoot the documentary in 2006. He shot it all himself as a crew of one. Over the years that followed, he struggled to finish the film by working as a used car salesman, a file clerk and in the health care field. His next project will be about long-haul truckers.

The national television broadcast debut of “Prison Terminal” is tonight at 8 p.m. CST on HBO.