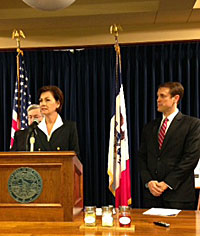 “As I’ve had the opportunity to lead trade missions around the world, I’m telling you Iowa brand is so respected for not only the quality but the safety of the products were grow right here in Iowa,” Reynolds says.

Reynolds, along with both the CEO and the president of the Iowa Soybean Association, will be in Thailand for three days, starting on April 8.

“With Thailand’s population over 69 million, it has the largest and most sophisticated soy food industry in southeast Asia,” Reynolds says. “And with Iowa farmers producing more soybeans than most of the countries in the world, there is tremendous potential to increase our state’s exports.”

Grant Kimberly, a soybean farmer from Maxwell who is director of marketing for the Iowa Soybean Association, says no other U.S. state produces more soybeans or soybean meal than Iowa.

The country’s poultry and aquaculture industries are growing, according to Kimberly, and need a growing amount of soy meal.

“Especially in Asia, we see that face-to-face communication is critical in developing business relationships,” Kimberly says. “They can put a face to the industry. They are keenly interested in how we run our farms and our businesses and, by participating in these trade missions, that helps us grow those relationships and strengthen that demand.”

The Iowa delegation will meet with executives of the world’s largest producer of livestock feed in Bangkok, Thailand, and visit Thailand’s largest soybean processor.  This is Reynolds’ second visit to Thailand. She visited the country on a trade mission in 2012.