You are here: Home / Health / Medicine / Parents of epileptic children meet with Branstad to talk about medical cannabis 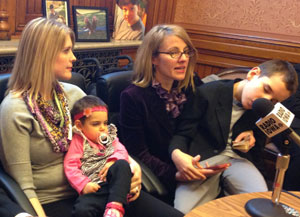 April Stumpf of Riverside, Maria La France of Des Moines and their children

A group of nearly 20 parents and their children who suffer from severe epilepsy met with Governor Terry Branstad for half an hour this morning — and the parents say they are now more hopeful the governor might approve a law allowing their children to take an oil derived from marijuana as a treatment for their condition.

Maria La France of Des Moines told reporters Branstad was “compassionate” and “gracious” to her and the other families. “He mainly listened to our concerns and the hardships that we Iowans have had to deal with,” La France says, “with our medically-fragile patients.”

La France said Branstad told the group he’d talk with the governor of Alabama, a Republican like Branstad who will soon approve legislation to decriminalize possession of marijuana-infused oil that recommended by a doctor as treatment for epilepsy.

“Our children have run out of options,” Le France said. “We know that this oil is helping children in other states right now.”

April Stumpf of Riverside, the mother of a 21-month-old who has severe seizures, told Branstad medical cannabis does not have the severe side effects of the prescription drugs the children are taking today.

“He was very open to listening today,” Stumpf told reporters. “And so I think that’s the big thing is the stigma around it seems to be what’s hurting the cause more than anything.”

A spokesman for the governor described the meeting as “cordial” but added the governor “reserves judgment until he sees legislation in its final form.”