You are here: Home / News / “Sing Me to Heaven” group lobbies legislators for state funding 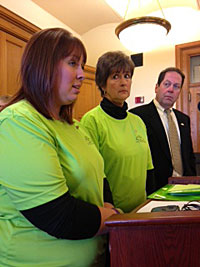 A small group of Iowans involved in the “Sing Me to Heaven” Foundation is asking legislators to pass a bill that would set aside $100,000 in state tax money to help low-income families who have to bury a child. Jennifer Mehlert of La Porte City started the non-profit group after her daughter died in early 2010.

“I was 27 years old at the time and I had to plan a funeral…and the funeral bill was over $9,000,” she said during a statehouse news conference. “It was comparable to an adult’s, so I began to think about it and I decided something needed to happen so, with the support of my mom, we started Sing Me to Heaven.”

The bill would funnel the state money to Mehlert’s non-profit group for grants of up to $2,000 each to help pay for the funeral of a child in a family who’s receiving government assistance or who can prove financial need. Mehlert’s group has thus far raised $60,000 on its own and helped 42 families in 17 Iowa counties pay for the funerals of their children.

“With this one-time request of funds, we’re looking to potentially help at a bare minimum of 50 families…to take their time to grieve rather than having…to worry about downsizing, selling its vehicle or even looking at the possibility of bankruptcy,” says John McDermott, a member of the Sing Me to Heaven board of directors. “It provides them the opportunity to grieve properly.”

Larry Schwienebart of Baxter said it’s “not right” that needy families face the financial stress of a funeral when a child dies.  He’s at the statehouse, urging legislators to pass the bill.

“I’ve been through the Vietnam conflict and that was hell,” an emotional Schwienebart said. “But losing a granddaughter who was like a daughter to us was the worst thing I’ve ever faced in my life and you don’t understand it until you’ve been there and I wouldn’t wish this on anyone.”

Representative Bob Kressig, a Democrat from Cedar Falls, is the main sponsor of the bill that would set aside state money to pay for the funerals of low-income children.

“It is real,” Kressig said. “It is happening and families are suffering.”

The bill has not yet been considered by a subcommittee in the Iowa House and there’s no meeting scheduled.