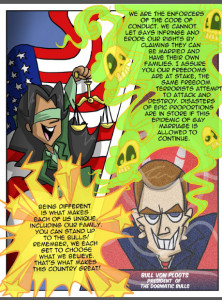 A page from the Mighty Moxy comic book. (click to enlarge)

A liberal advocacy group is using the leader of a conservative group in Iowa as its villain in what is called an anti-bullying comic book.  The “Mighty Moxy” comic book was developed by Progress Iowa executive director Matt Sinovic.

The comic book villain is modeled after Bob Vander Plaats, the president of The Family Leader. “We created Mighty Moxy to show that anyone can be a superhero by standing up to bullying, whether it exists in the classroom or outside the classroom. Unfortunately, many on the extreme right — Bob Vander Plaats is a prime example of this — but many on the extreme right use hateful rhetoric to do what we consider political bullying,” Sinovic said.

Sinovic unveiled the comic book at the annual Governors Conference on LGBTQ youth Tuesday. He said those who use “political bullying” do so to ostracize those they don’t agree with.

“So this comic, and using Bob Vander Plaats as the basis for our villain Bull Von Ploots, was designed to specifically help people stand up to that rhetoric,” Sinovic said.

Vander Plaats and The Family Leader have been at the forefront in the debate over gay marriage in Iowa. The group led a successful campaign to oust three Iowa Supreme Court judges after the high court threw out the state’s ban on gay marriage. Sinovic rejects the idea that targeting Vander Plaats as villain in a comic book because of his conservative beliefs is a form of bullying.

“We’ve heard that a lot and, frankly, that’s completely ridiculous,” Sinovic said during an interview with Radio Iowa. “Bullying is classically defined as an imbalance of power.”

Sinovic said since Vander Plaats’ group and others are larger, they are the bullies, and attacking him in the comic book is not bullying.

“When you have someone like Bob Vander Plaats, like (Des Moines radio talk show host) Jan Mickelson, Rush Limbaugh who (have) big audiences and can get their message out and they use that sort of megaphone to ostracize and to demonize people they disagree with — that is bullying. What we are doing is standing up to and holding those bullies accountable,” Sinovic said.

He was asked if it would be bullying if The Family Leader created a comic book featuring him as a villain because of his support of gay rights. Sinovic laughed and said: “So far they haven’t done that.”

Sinovic said The Family Leader and others say they stand for freedom, then draw a line designating who should have the freedom.

“But only freedom and only equality for people they want to have it. That is simply unacceptable,” Sinovec said. “And for us to deny rights to any group of people, and for them to use the language that they use only encourages further bullying, further stereotyping, further discrimination.”

Sinovic, who is using the comic book to raise funds for Progress Iowa, said people who donate $12 will get a copy of the comic book and another book will be provided to the Iowa Safe Schools group.

Radio Iowa contacted The Family Leader for a response, but a spokesman for the group deferred to the governor. The Governor’s office issued this statement:

“Gov. Branstad believes we ought to treat everyone with dignity and respect. Bullying, whether it be in the form of a comic book, social media or verbal communication, has no place in Iowa.”