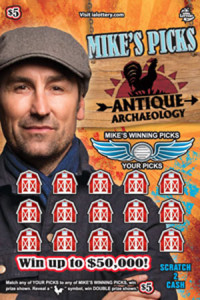 The eastern Iowa man who turned his love of searching through dusty old barns and outbuildings for hidden treasures into a TV show is now featured on an Iowa Lottery scratch ticket.

Mike Wolfe of Le Claire, the creator and star of the History Channel show “American Pickers“, says officials from the Iowa Lottery and Iowa Tourism came up with the idea for the ticket. “We started talking about — oh gosh — almost two years, the idea of putting what I do into your hand as far as a treasure hunt. So, it’s a scratch ticket and you can win up to $50,000,” Wolfe says. The ticket features a picture of Wolfe and the logo from his two Antique Archeology stores in LeClaire and Nashville, Tennessee.

The $50,000 is the most cash you can win with the five-dollar ticket, but there’s also trips you can win to Le Claire, and a grand prize trip to Nashville. “When you go to Nashville, you can go to the Nashville store and also to the Grand Old Opry. And there’s also product you can win from 12 of my favorite businesses in Iowa,” Wolfe explains.

Wolfe says the show has already shown a lot of people more about the state, and the goal of the ticket is to bring even more attention. “There’s versions of our show in Australia and Italy and England and Canada, so all of those people are coming here to Iowa to our store. And they’re spending money in this great state with the restaurants and lodging and fuel,” according to Wolfe. “We get a lot of e-mail and people are saying ‘I cannot believe how beautiful Iowa is.’ Because we really started filming this show in Iowa.”

The show is about finding hidden treasures — and after five years on the air — the prospect of finding a treasure in an old Iowa barn isn’t so secret anymore. But Wolfe says there are still more things left to find, despite the increased attention. “It’s harder in some ways and easier in others.  I mean we have more information that we have to filter through. We literally get thousands of e-mails  and phone calls every month from people who want us to come and pick ’em,” Wolfe says. “But one man’s junk is usually one man’s junk. So, you have to sift through all that — and once you filter all of that — then we decide which route we are gonna  take.”

Wolfe is executive producer of the American Pickers show and says as they start working on their sixth season, he wants to focus on some Iowa picks. “So, we’ve already started putting our feelers out about this season. It takes us about a year to film a season,” Wolfe says. Wolfe travels Iowa and the country with Davenport native Frank Fritz on the show. Fritz has his own store in Savannah, Illinois, just upriver from Clinton. He is not part of the ticket with Wolfe.

Wolfe says dealing with all the attention and recognition the show has gotten hasn’t become a problem. “The show resonates with so many people on so many different levels — and yeah people recognize us wherever we go now — heck we’ve been on the air for five years now you know. But I’ve always looked at it as business and I’ve looked at it as a blessing,” Wolfe says. “When people come up to me they tell me they love the show and they are like ‘you probably hear that all the time.’ I tell them I do hear that all the time, but I never get tired of hearing that, we work very hard.”

He says they are on the road about seven months out of the year and it is harder for him now because he has a two year old daughter back at home. The tickets are now on sale. You can find out more about the tickets, rules and prizes on the Iowa Lottery’s website: www.ialottery.com.