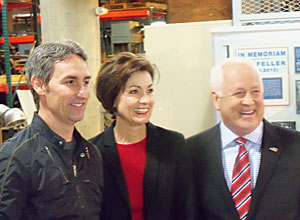 The Iowa Lottery’s newest scratch ticket features the creator of the popular TV show American Pickers, which is based in LeClaire in eastern Iowa.

Lottery CEO Terry Rich says celebrity tie-ins with tickets add something new for players.  “This is not unlike what we’ve done a few other times, we used Lolo Jones in some commercials a few years ago, and obviously you just saw one with Terry Bradshaw and Jerry Rice and a whole bunch of football stars,” Rich says. “Each time we do a ticket, we try to give it a different feel and a different look.”

The latest ticket features Mike Wolfe on the front and barns that players can scratch off looking for cash prizes.

Rich says this ticket may have more appeal to border states with the popularity of the TV show. “We have a lot of people that come across the border from Illinois to Iowa, for two reasons. One is, LeClaire is in Iowa and if they want to see Mike’s shop they need to stop in LeClaire. Second, is a lot of people drive across to get cheaper gas in Iowa, because our gas tax is less. And when they come across it’s the perfect time to pick up a lottery ticket,” Rich says.

Rich says Wolfe is getting paid around $77,000 to use his likeness and promote the ticket, which he says is similar to the amounts paid to others. And he says the ticket should generate lots of sales. “We do get a lot of revenue on things like this when people come across the border and buy the tickets in Iowa. They have to purchase them in Iowa and they are also redeemed in Iowa, so if it’s a big cash prize, we have taxes we collect, so it’s kind of a triple win,” Rich says.

Iowa Tourism director, Shawna Lode, says they expect the ticket to generate revenue in other ways. There’s a second-chance drawing that allows players to win trips to LeClaire and Iowa products. “Things like Monastery candy from Dubuque, items from the Surf Ballroom in Clear Lake, items from Pairieland Herbs in Woodward, Iowa. Some really great products that represent our state,” Lode says.  The $5 ticket is now on sale at retailers across the state.

Rich says the Iowa Lottery plans to contact other states to see if they might be interested in an “American Pickers” ticket due to the popularity of the show. Wolfe visited the state Historical Society in Des Moines today to promote the ticket.