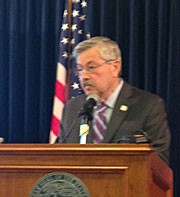 Governor Terry Branstad says Iowans should not “assume as fact” the allegations of a former state worker who says he was offered extra cash to keep his settlement agreement secret.

A laid off state worker has produced a letter from his attorney which outlines an offer of additional money if that worker would agree to a confidentiality clause in his settlement. Branstad today questioned the authenticity of the document.

“What you’re doing is assuming as fact the attorney for the dismissed employee,” Branstad told reporters during his weekly news conference. “That is just one person’s opinion.”

Branstad is siding with his director of the Iowa Department of Administrative Services.

“I specifically asked director Carroll about this matter and he assured me that was not true. He also went before the (legislative) committee and said the same thing and I believe him,” Branstad said. “I do understand that you do have a disgruntled employee and his lawyer who have made contradictory statements to that.” 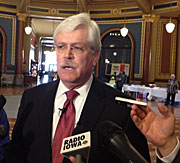 State Senator Jack Hatch, the only Democrat running to oppose Branstad in the fall, said these allegations “are a cancer on the integrity” of Branstad’s administration. “He doesn’t know the facts,” Hatch told reporters during a news conference. “…A he-said, she-said kind of situation may only be resolved in the courts and I think that would be too bad.”

Hatch is calling for an independent auditing firm to examine all the documents and the state agency budgets from which the settlements were paid.

“We have to be accountable to the voters,” Hatch said. “It’s how we conduct ourselves in the midst of the highest criticism of our administration that we should be judged and (Branstad’s) deflecting all of these questions with incomplete answers or complete denials.”

Hatch suggests laws may have been broken because the Department of Administrative Services dipped into its utilities budget to cover the exit packages for laid-off workers, rather than using money legislators gave the agency for salaries. The Iowa House is scheduled to debate a bill later today that supporters say would make Branstad’s executive order state law. Hatch says it does not go far enough, and should apply to legislators and their staff, not just the executive branch of state government.

Republicans have suggested Democrats have manufactured the controversy over these settlements to help Hatch’s campaign.  Hatch told reporters today: “Democrats aren’t that organized.”