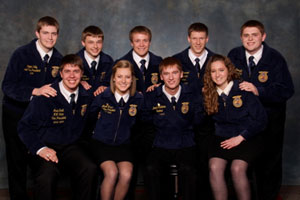 The Iowa chapter of the Future Farmers of America Association has announced its membership has climbed to a record high this year. Iowa FFA executive secretary Scott Johnson says there are 14,207 members in 219 high schools across Iowa.

That’s up 57-percent compared to a low reached in 1989, following the Farm Crisis. “So, this is something that has been 25 years in the making,” Johnson says. “We’re thrilled to be back to where we really think we should be and hope to grow some more.”

The previous record was set during the 1977-78 school year with 14,204 Iowa FFA members. Johnson says more girls are joining the organization. “Our male enrollment has been fairly steady to slowly growing over the last 25 years, but our significant growth has been in our female membership,” Johnson says.

The organization was launched in the state in 1929. The 86th Iowa FFA Leadership Conference is scheduled for April 27-29 on the campus of Iowa State University in Ames.