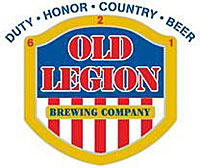 A Ladora businessman is working on rolling out an Iowa brewed beer with a military theme. Dimitri Makedonsky says the idea for the “Old Legion Brewing Company” came as he worked on an old bank in the town.  “Over the years of restoring that building and making it a wine bar, I also purchased a couple other old buildings in town — one being another old bank and the being the old American Legion Building. And as I was restoring in the process of restoring the American Legion Building as my home, I just kind of came up with it,” Makedonsky says with a laugh.

Makedonsky was born in Minnesota, but grew up in the Waterloo area. He served in both the Army and the Air Force, but wasn’t sure how to get the beer idea off the ground.

“I don’t know anything about brewing beer — never have — and it really did not interest me. I just had the idea of brewing the beer,” Makedonsky explains. He says he went to the University of Iowa’s Small Business Development Center and tried to learn more about the industry.

Makedonsky also worked with a St. Paul brewer to refine his product. While he had to be educated on how to make the beer — he already knew he wanted the beer to benefit fellow veterans. “Portions of the proceeds from the sale of the beer are going to go to local veterans groups and organizations in the state,” Makedonsky says. “And 100 percent of my proceeds on my website’s merchandise will go to local veterans groups as well.”

The first beer will be called “Big Gun Lager” in celebration of the Army, and he hopes to create three more military-themed beers. He believe the Old Legion branding, and the tie to military organizations like the American Legions and VFW’s which will sell the beer, will make it popular.  Makedonsky hopes to launch the beer on Memorial Day, a holiday that honors veterans and is the unofficial start to summer. “I’m still just in the process of hiring people to go out into the field and be my account reps. I plan on hiring only veterans to work for me, to represent not only my brand to tell the Old Legion story, but to tell their story as well,” Makedonsky says. He says the first beer will be a “smooth, easy-drinking lager.”

You can find out more about the beer at his website: www.oldlegionbrewing.com