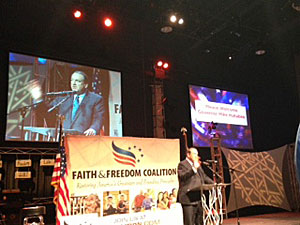 Former Arkansas Governor and 2008 Republican presidential candidate Mike Huckabee — the winner of Iowa’s 2008 Caucuses — spoke to an Iowa crowd tonight, calling on Christians to embrace economic populism and to reject the erosion of personal liberties.

“One of the reasons why I’m here is because I’m concerned there are some directions we have taken as a nation that make no sense to me based on understanding just a little bit of who we are as a country,” Huckabee said.

Huckabee did not mention the Affordable Care Act, which Republicans call ObamaCare, and he suggested the GOP’s presidential candidates in 2008 and 2012 were unsuccessful because they didn’t present an understandable message to voters.

“Not only did we bail them out, they got bonuses for  having ruined their companies and ruining the country’s economy and I’m thinking there’s something horribly wrong when we do not prophetically call out that kind of corruption, that kind of cronyism,” Huckabee said. “…When you punish the productivity of good people and you reward the reckless irresponsibility of others,  you cannot expect the blessing of God in your economy and in your life.”

Huckabee, who has also served as a Baptist minister, sprinkled his 45 minute long speech to the Iowa Faith and Freedom Coalition gathering with humor, but of a government drifting toward “tyranny” with decisions like requiring enhanced security checks of every passenger inside the nation’s airports.

“When did we ever come to the place where we’re willing to stand in a little box and get electronically strip-searched, putting our hands up in the surrender position, as if we’d just been arrested without due cause, probable cause and without a warrant for our arrest?” Huckabee said. “Look, I’m trying to be some wacko way out there. I’m talking about the most basic, fundamental rights we have as an American citizen.”

Huckabee met privately with Republican Governor Terry Branstad and Republican legislators earlier in the day. Huckabee’s last trip to Iowa was in late-2013 and, during an interview with Radio Iowa, Huckabee made it clear then he was thinking about another run for the White House in 2016. This Friday, 2012 Republican vice presidential nominee Paul Ryan is due to speak in Cedar Rapids at an Iowa Republican Party fundraiser. Other potential 2016 GOP presidential candidates like Rick Santorum and Rick Perry have visited Iowa in the past month as well.