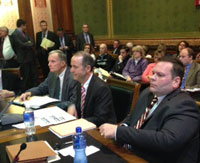 Branstad fired Mike Carroll, the agency’s now-former director, late Tuesday afternoon — shortly after legislators were given email that showed the agency’s legal counsel offered a laid off worker $6500 if she would keep her exit agreement secret.

“My chief of staff and deputy legal counsel yesterday afternoon went over there to the Department of Administrative Services and notified Mike Carroll that he had been terminated and that he needed to clean out his stuff and leave immediately,” Branstad told reporters this morning. “Janet (Phipps) was asked to take over immediately as the director. I have full confidence in her and that she will see that things are done appropriately and that all records are preserved and protected.”

Phipps is a retired Iowa National Guard general who has worked in state government before.

“She served as the department head before when it was (the Department of) General Services,” Branstad said. “She also served as a department head for Governor Engler in Michigan and I have great confidence in her and her abilities.”

The email exchange released yesterday shows Ryan Lamb, legal counsel for the Department of Administrative Services, had negotiated with the lawyer for a laid off employee and agreed to pay what critics have called “hush money” to make the settlement confidential.

“The only individual who really, at least from the information I’ve seen, that was involved in this negotiations that inappropriately used tax money as part of this confidentiality agreement was Mr. Lamb,” Branstad told reporters, “and he has subsequently left employment with the State of Iowa.”

Lamb left that job six weeks ago, shortly before the deals were revealed in a Des Moines Register investigation. Branstad said his chief of staff talked with Lamb three weeks ago and asked Lamb if any of the 24 laid off state workers who got exit settlements had been paid extra to keep the deals secret.

“That information was not disclosed to us,” Branstad told reporters. “It was only disclosed when the emails from the attorney representing the former employee made that information public. I had never seen that, was not aware of that and actually was assured by Mike Carroll that was not the case.”

Branstad does not plan to fire any other employees in the agency. Democrats in the state senate have called on Branstad to put at least two other top administrators in the agency on paid leave. Those administrators appeared before the Legislative Oversight Committee last week, along with Carroll, when Carroll told legislators there were no “hush money” settlements.