One student was badly injured when a light pole was knocked over on top of him. “It’s with mixed feelings and a heavy heart that I’ve decided to suspend the remainder of this Veishea starting at 5 o’clock tonight,” Leath said at a news conference. “So, it’s done.”

In past years, violence during Veishea was blamed on non-students. But, Leath said it appears ISU students were primarily at fault. Leath said he’ll appoint a task force this week to help determine if Veishea will carry on in future years. “The task force has to consider not only the university’s cherished 92-year tradition, but also the very real black eye that results from a history of ugly incidents surrounding the otherwise wonderful event,” Leath said. 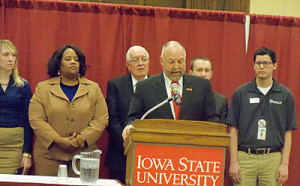 Veishea has been marred by violence and riots many times. In 1997, a young man was stabbed to death in a fight outside a fraternity house. Riots in 2004 led then-ISU President Greg Geoffroy to suspend Veishea in 2005. Leath says all the efforts to change and fix Veishea have led right back to the same result once again.

A decision on whether or not Veishea will be held in future years will come within a couple months. “We’re going to work quickly on this,” Leath said. “I anticipate receiving a task force recommendation and making a decision by the end of the academic year.” The name of the student who was injured in the rioting early this morning is not being released, but Leath said the male student is conscious, still in intensive care, but  in stable condition at a Des Moines hospital.