You are here: Home / Crime / Courts / ISU and Ames community react to cancellation of Veishea 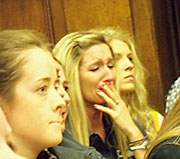 Students react after hearing the rest of Veishea is canceled.

Iowa State University students who spent the year planning to get the annual Veishea celebration are today dealing with the decision by the school to shut the event down. ISU president, Steven Leath, announced the decision Wednesday afternoon after an outbreak of violence earlier in the morning.

Leath met with members of his administration and city officials before making the decision. “There was very little support for continuing Veishea this week,” Leath says. Students tipped over cars and threw rocks and cans at police after officers attempted to break up a party. One person was hit by a light pole that was knocked over, and remains hospitalized.

Veishea has seen several disturbances going back to the late 1980s — but all had happened during the weekend. Leath says this timing of this outbreak is telling. “We used to blame some of these issues on people who came to Ames from out of town. It was never us. Well, this time it was us,” Leath says. 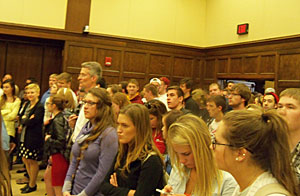 Students waiting to hear from ISU President Steven Leath on the fate of Veishea.

The room was packed with students and some showed shock and cried and hugged each other when Leath made the announcement.

Student body president, Hillary Kletscher, was in on the discussion about canceling the event.

“It’s disappointing to see that a handful of students have really taken away from some of the great traditions that we celebrate each year during Veishea,” Kletscher says. “Over the next few days my key message is going to be providing as much information as I can to students. Being their to offer them resources, to connect them with people and whatever they really need, and to answer whatever questions that they have.”

Kletscher will be part of a task force Leath will put together to decide the fate of Veishea after this year. She wants to reach out to the students who haven’t been involved in the direct planning and implementation of

Veishea to find a way to change things. “You know students who go to class every day who look forward to Veishea and going to events and participating in some of the unofficial Veishea events that do go on,” Kletscher says. She says she wants to talk with them and collaborate with them.

Not everyone though the cancellation of Veishea was the way to go. Cole Stuadt is a freshman from Rockford. “I’m very disappointed, this is my first year at Iowa State and everyone always says a lot of good things about Veishea and I was looking forward to going to a lot of  the events. They were just getting started,” Stout says.

Stout would rather have seen the regular Veishea events continue. “I think this was a wrong decision,” according to Stout. “The Veisheas events provide the opportunity for students to go to a safe event where it’s controlled, police and security have a good feel for what is going on, there’s no alcohol involved.”

Stout wonders how everyone will react to finding out the event canceled. “There’s thousands of people planning to come to Ames for the weekend. And what happens when college students are sitting around with nothing to do? They drink,” Stout says. “And I have a feeling what we saw last night is going to be on a much larger scale this weekend.” Ames police say they are taking action to ensure there are not more problems this week.

Three people have already been arrested and police continue to review videos of the riot. ISU president Leath warned students who were involved that they will face legal action and he said they can also face action from the university that could include being expelled from the school.