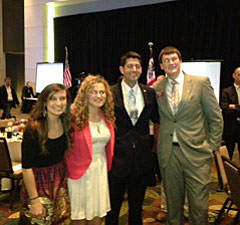 Paul Ryan poses for a picture during a visit to Iowa.

Wisconsin Congressman Paul Ryan is urging his fellow Republicans to be the “great alternative party” and to unify for the 2014 election.

Ryan spoke to a crowd of over 350 at fundraiser in Cedar Rapids for the Iowa GOP.

Ryan, the Republican Party’s vice presidential nominee in 2012, began his speech with a short lament about the outcome of the 2012 presidential election and Ryan mentioned the budget plan he championed that passed the Republican-led House this week. But Ryan dedicated much of his remarks to a vision for the party’s future.

“We don’t believe in inputs and throwing more money at the problem. We believe in outcomes,” Ryan said. “We have to be not just the ‘good opposition party.’ We have to be a ‘great alternative party’ and we have to show that these ideas and these principles which made us so great in the first place are as relevant and important today as they ever were before.” 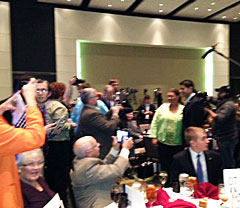 “I think we can win the big election in ’16 — we, the Republican Party — and save this country from what I think is a very dangerous path that we are on,” Ryan said.

AUDIO of Ryan speaking with reporters, 6:00

A group of protesters gathered across the street from the hotel ballroom where Ryan spoke, criticizing what they called Ryan’s “reckless, dangerous…anti-middle class budget plan.”