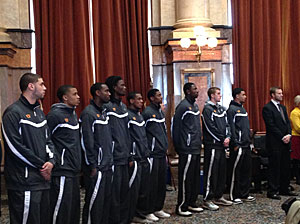 The Cyclone basketball team and Coach Fred Hoiberg were honored by the Iowa House and Senate.

The Iowa State basketball team visited the statehouse this afternoon where both the house and senate passed resolutions honoring a Cyclone squad which won the Big 12 Tournament and made it to the “sweet 16” of the NCAA Tournament.

“This is such a tremendous honor for our basketball team. Just the support that we’ve had all across the state of Iowa has been absolutely tremendous,” Iowa State coach Fred Hoiberg told lawmakers.

Hoberg says  the Cyclones appreciated the bi-partisan support during their NCAA tournament run. “To have Congressman King, to have Governor Branstand come into our lockerroom and talk to our teams. To be able to talk to Senator Harkin on the phone — who called just before we went out to  New York to play in the that Sweet 16 game against Connecticut — where if fully health, I fully expect we would have won that game. It would have been us cutting down those nets in Dallas — but hey, it happens,” Hoiberg says.

Hoiberg introduced the players in both chambers and said it was a “great day for Iowa State.”