You are here: Home / News / It was a sunburn Saturday to snowstorm Sunday across Iowa 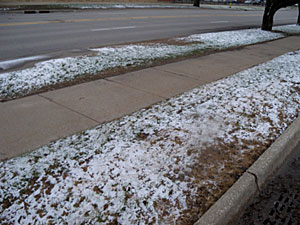 Overnight snow left green grass flocked in white in many areas of the state.

It was a wild weather weekend for many Iowans, with a little something for everyone, including near-record high temperatures, thunderstorms, flooding, high winds, hail and snow.

A tornado touched down around 6 P.M. Sunday near Lone Tree in eastern Iowa’s Johnson County, but no damage was reported.

Meteorologist Craig Cogil, at the National Weather Service, says it went from balmy to frigid pretty quickly. “On Saturday, we saw highs in the state well into the 70s and up into the mid 80s,” Cogil says. “Since that time, it’s been downhill to where temperatures in the state this morning are anywhere from the mid 30s in the southeast to mid 20s in the northwest, so a good 50-degree drop in some locations.”

Some Iowans awoke today to see their newly-sprouted green grass and tulip leaves covered with a white blanket of snow. “We’ve had some reports of a half-inch to an inch-and-a-half in various locations in central and northern Iowa,” Cogil says. “It is sticking this morning however, I don’t anticipate it’ll last too long.”

He expects temperatures to warm up very gradually this week. “Today is going to be well below normal,” Cogil says. “We’re going to remain relatively cloudy in most locations with highs only rebounding up into the mid to upper-30s across the state. We’re not going to see better moderation until we get into Tuesday and Wednesday.”

Highs on Tuesday are mostly expected in the 40s statewide, with 50s likely on Wednesday. There may be another chance for snow on Thursday.