You are here: Home / News / Branstad releases his 2013 income tax returns, plus a letter from his doctor 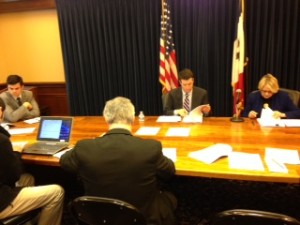 Republican Governor Terry Branstad has released the state and federal tax returns he and his wife have filed, revealing the couple reported taxable income of almost $235,000.

Branstad’s salary as governor is just over $127,000 and he got about $55,000 from his state pension for his 30 years of service as a state legislator, as lieutenant governor and for his first four terms as governor. Branstad and his wife, Chris, own 13 rural post office buildings and collected $64,000 in rent last year, plus the Branstads reported income from investments and from an IRA willed to Branstad by an uncle who died recently.

The couple donated just over $40,000 to charity in 2013. That’s 17.2 percent of their total income. Reporters were allowed to read through Branstad’s tax returns this morning, as well as  read a short letter Branstad’s doctor wrote after the governor’s last physical in late February. The doctor said he found the 67-year-old Branstad “to be in good health” and the doctor said he had “no concerns” regarding Branstad’s “health and capacity to work.”

Jack Hatch, the only Democrat running for governor, released his 2013 tax returns as well as a letter from his doctor yesterday. Hatch reported he and his wife — who are property developers — had about $469,000 in income last year. Jack and Sonja Hatch paid over $88,000 in federal income taxes and almost $29,000 in state income taxes.  Terry and Chris Branstad paid $28,000 in federal taxes and $6200 in state taxes.