You are here: Home / News / State may have to repay feds for co-mingled cash in confidential settlements 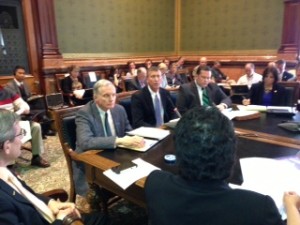 An official from the state agency under fire for confidential settlements that included “hush money” for laid off workers says the agency’s new system for managing state government construction projects has saved nearly 10-million dollars over the past 32 months.

Lon Anderson, the chief deputy director of the Iowa Department of Administrative Services, makes that calculation, in part, by estimating 15 percent savings in construction because general contractors are no longer allowed to manage state government projects. Construction is monitored by three state employees and six different private companies instead.

“This reorg was really about…effective construction management and savings for the taxpayers,” Anderson said during testimony today before the Legislature’s Oversight Committee.

“The numbers that we were going through today were all numbers that had no sense of context,” McCoy told reporters.

Another agency manager also confirmed some of the settlement money paid to the laid-off workers may have come from the federal government. Doug Woodley said that’s because other state agencies, which operate with both state and federal funds, are required to pay an annual management fee to the Department of Administrative Services and the agency doesn’t track the source of those payments. Democrats say that’s a problem and the state could be forced to repay any federal funds that might have been used.