You are here: Home / News / Decision on Cedar Rapids casino emotional for both sides 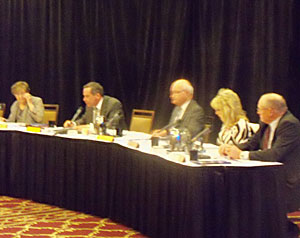 Racing and Gaming Commission members voted 4-1 to not issue a gambling license to a group from Cedar Rapids.

Steve Gray lead the group of investors who had told the commission the Cedar Rapids casino would generate more state gambling revenue with minimal impact on existing casinos. “We’re disappointed, we have a differing perspective,  but more importantly why we’re even here today, is our investor group and this community wanted to do something meaningful for Cedar Rapids and eastern Iowa,” Gray says. “Quite frankly,  as goes Cedar Rapids, as goes eastern Iowa.”

Dan Kehl operates the Riverside Casino and was pleased to hear the Cedar Rapids developers would not get a casino license. The state gambling studies said the new casino would eat into Riverside’s profits. “We are grateful to have this process behind us and thankful for the commission’s hard work,” Kehl says.

Kehl was asked if this will end attempts to gain a new casino. “There’s one more application pending, we’ll see how the commission reacts to that — but the market is clearly saturated or really near saturation,” Kehl says. “If we want to have first-class casino facilities here in Iowa that are competitive with surrounding states, we need to limit the competition so we can afford to reinvest, because of our high tax rates.”

The commission will decide in June whether to award a gambling license for a proposed casino in Greene County.