You are here: Home / News / No gambling license for Cedar Rapids 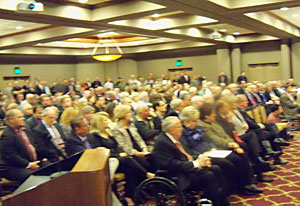 A large crowd turned out to hear the decision on the Cedar Rapids gambling license.

The Iowa Racing and Gaming Commission voted 4-1 against awarding a new casino gambling license to developers in Cedar Rapids.

Commissioner Carl Heinrich says he does not believe there’s a need for a new casino in the area. “I think that if anyone does desire to gamble, they have it within their accessibility within an hour in all cases, Heinrich says.

Heinrich says the two marketing studies show a new casino would hurt the existing facilities. “I believe the overall net benefit for the state gaming industry in eastern Iowa in terms of total operation is not positive enough to add a new license at this time,” Heinrich says.

Commissioner Dolores Mertz is a former legislator, who was the only one to vote for the new license. “I look at this just like I do agriculture issues.  When I was chair of the ag committee in the House for four years — nothing came through that committee that hurt agriculture,” Mertz says. She says the market should drive expansion in the gambling industry.  Mertz says she got many letters about the issue. “And my pros way, way outweighed my cons, so I have to listen to people,” Mertz says.

Commissioner Rich Arnold says the impact on existing casinos was his top concern. “The administrative rules require the commission to consider the impact on other casinos. There is a significant amount of impact for two existing casinos, which would likely trickle down to decrease investment to their properties and loss of jobs,” Arnold says. He says awarding a new license would change the past policies of the commission.

“No gaming license in Iowa has ever previously been issued where this much impact has been proposed for two existing facilities,” Arnold says.

Commission chair, Jeff Lamberti, echoed the comments of the other commissioners in explaining his vote against the new license. “This is not a decision that any of us is too excited about. It is never fun to go through something like this, but I am confident that the commission as a whole is making a decision that is in the best interest in the state of Iowa,” Lambertis says.  The vote shoots down several months of planning by the group in Cedar Rapids, which touted the casino as another step in the redevelopment of the city in the wake of the flooding in 2008.