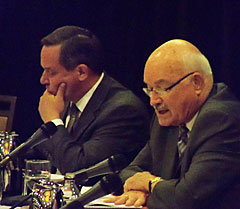 The Iowa Racing and Gaming Commission turned down the request from Cedar Rapids for a new gambling license, but the chair of the commission  says that doesn’t mean they’re saying no to any new licenses this year.

The four commissioners who voted against a license for the facility in Linn County cited the impact the new casino would have on existing facilities in eastern Iowa. Commission chair, Jeff Lamberti of Ankeny, says it’s a whole new situation when they look at a request for a gambling license for Greene County in June. “I think we’re not necessarily looking at an apples-to-apples comparison,” Lamberti says. “Obviously here in Linn County we were looking at a very significant impact on two or three markets.”

The commission members talked about what they see as the gambling market reaching a saturation point in making their decision on the Cedar Rapids license. Lamberti says he expects the body will send a message about any future expansion following the Greene County discussion.  “When we get to the Greene County decision, I think I would expect the commission — based upon the ruling there — to then give an indication to the rest of the state what we think is out there, and if we are going to be willing to consider further applications,” Lamberti says.

He wouldn’t speculate on what may happen with the Greene County proposal. “We’ve quite honestly not even spent a lot of time thinking about Greene County right now, because we try to focus our decision making on the one before us. And that’s quite frankly why we separated them,” according to Lamberti. “Because this is a long, tough, hard process and we want to be sure people have ample opportunity to present their case to the commission. So now that this decision is behind us, we start focusing on Greene County. I don’t think anybody has prejudged anything, they didn’t with respect to Linn County, and they haven’t with respect to Greene County.”

The Racing and Gaming Commission is set to visit the Greene County site on May 29th, and will make a decision on a license at its June 12th meeting.