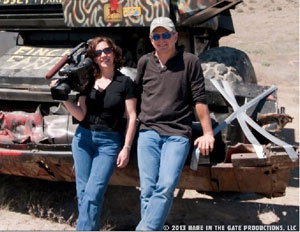 A documentary about how a small farm town overcame some of its challenges by holding an annual combine demolition derby will be featured at a film festival in northeast Iowa next week. “Dryland” is also about the struggles of a young man who had to leave his family’s farm in order to make a living.

Sue Arbuthnot produced and directed the film, which centers on the unusual farm implement demolition derby. Arbuthnot says, “That really is a metaphor for the resilience and ingenuity that rural communities are finding to be able to rebuild themselves by rebuilding old equipment and then drawing tourists into the community and rally around a fundraising effort that really supplies funds for the entire rest of the year.”

The film was shot in and around the small burg of Lind in Washington state. Arbuthnot is a Wisconsin native and is based in Portland, Oregon. She says it’s a thrill to be coming to Iowa for the Julien Dubuque International Film Festival.

She thinks Iowans will very much relate to the film’s central character, Josh, as economic troubles and technological advances in agriculture force him to leave the fourth-generation family farm. Arbuthnot says, “Certainly, the universal themes of not just farm youth wanting to find a way to stay on farms, but just young people in general finding ways to pursue a dream through optimism, through hard work, through problem-solving and fixing things up and through a community-building effort.” 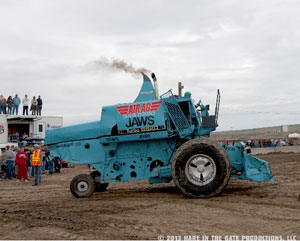 Josh has a vintage John Deere combine named “Jaws” which he’s painted blue and affixed a dorsal fin to the roof. He and his friends compete in the annual combine demolition derby which draws 5,000 visitors to the community of 500, helping to support a host of community programs.

“The combine derby itself is a spectacle and it’s quirky and young people are drawn to that aspect of it,” Arbuthnot says. “I think also, too, just learning about how to follow a dream is something that young people — and old people, older people, me — find very inspirational.”

The film was ten years in the making and eventually sees Josh land one of his “dream jobs” in Iowa — at John Deere in the Quad Cities. Arbuthnot and her filmmaking partner/husband Richard Wilhelm will be in Dubuque to do question-and-answer sessions after each of the documentary’s four showings, each day April 24th through the 27th. The film showcases an original score by Mark Orton, who most recently scored the Oscar-nominated film “Nebraska.”