You are here: Home / Human Interest / Iowa soldier talks about Medal of Honor recipient who saved his life 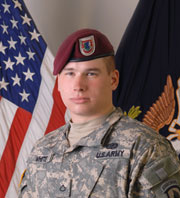 A veteran from eastern Iowa will be at the White House next month as a fellow Army soldier who saved his life is awarded the Medal of Honor.

Former U.S. Army Specialist Kain Schilling was with his unit in northeastern Afghanistan on November 9, 2007 when they were ambushed by the enemy.

Schilling was shot in the arm and leg. Another specialist, Kyle White, is credited with helping Schilling survive the four-hour ordeal. The Cedar Rapids native says White applied tourniquets to his wounds and found them slight cover under a tree.

“As he’s doing all of this, he’s getting shot at,” Schilling said. “He gets hit with an RPG (rocket propelled grenade). His radio and his uniform are shredded by bullet holes and even after all of that, he calls in the MedEvacs (helicopters), collects all of the sensitive items, and gets us 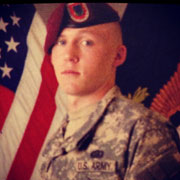 all out of there.”

White tried several times to pull another injured team member to safety, but Marine Sergeant Phillip Bocks ultimately died at the scene. “He put his life on the line multiple times to get (Bocks) out and it just shows why Kyle deserves this and what kind of character he is,” Schilling said.

The platoon leader, 1st Lieutenant Matthew Ferrara, was also killed in the attack. Four other U.S. soldiers were killed and many more wounded elsewhere in the region. 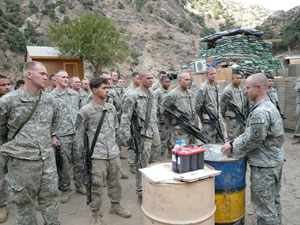 Schilling admits, nearly five-and-a-half years after being rescued from the battlefield, he finds it hard to cope with the memory of that day.

“I wouldn’t say it gets better with time, but you get used to it,” Schilling said. “I’ve got a great system with the VA here, so I get treated for PTSD (Post-Traumatic Stress Disorder) and the VA really helps out on that end.”

Schilling, now 27, lives in Palo and works at the Duane Arnold Energy Center. He’s engaged to be married next year and has a two-year-old daughter. White, a Seattle native who now resides in Charlotte, North Carolina, will become the seventh living recipient of the Medal of Honor for actions in Iraq or Afghanistan since 2001.

The award ceremony is scheduled for May 13.