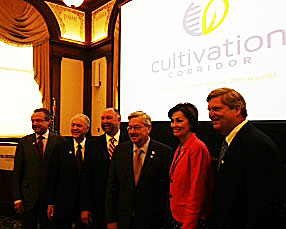 “It defines our desire to build and create something more than just the sum of our parts,” Leath said this morning, “but to make this region the premiere ag bioscience hub in the nation and the world.”

Leath, who points to the “Silicon Valley” as the most recognizable regional brand, used to head research at North Carolina State, in the so-called “Research Triangle” of Raleigh, Durham and Chapel Hill.  Leath was hired to be Iowa State’s leader, in part, to try to replicate that in central Iowa, along the I-35 corridor.

“We are one of the premiere ag biosciences regions for the nation and, indeed, the world,” Leath said. “And the fact of the matter is Iowa State University is very proud to be at the heart of this region, to be actively involved in developing the workforce and the innovations that are critical to the bio-based economy of today and, more importantly, of tomorrow.”

US Agriculture Secretary Tom Vilsack, a former Iowa governor, said the “Cultivation Cooridor” puts the entire state at the center of efforts to feed an expanding world population.

“Now that we’ve got the brand, let’s go sell it,” Vilsack said, to applause from the crowd.

“Iowa is already a leader in agriculture production, research and innovation,” Branstad said. “…I believe this ‘Cultivation Corridor’ will yield great dividends.”

Brent Willett, the president and CEO of the North Iowa Coordinator Economic Development Corporation, has been hired as executive director of this new central Iowa initiative.