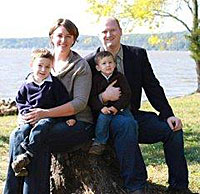 The Democratic candidate in Iowa’s fourth congressional district has revealed his young son has been diagnosed with a rare degenerative disease.

Jim Mowrer of Boone quit his Pentagon job nearly a year ago and moved back to his hometown to challenge Republican Congressman Steve King’s bid for re-election. Late last week Mowrer sent an email to supporters, revealing a few days before Thanksgiving he and his wife received “devastating news.” (Read the letter here, posted at 4:30 this morning on the www.okhenderson.com blog.)

Their three-year-old son, Jack, had been diagnosed with “a serious and rare disease” known by the initials A-T.  Mowrer explained that “over the next few years” his boy will lose the ability to walk. His speech will become slurred and then he’ll have trouble swallowing and breathing.  Mowrer revealed he and his wife discussed ending his campaign in December, but they decided it “was right” to continue the race, since “many families face difficult circumstances that are out of their control.”