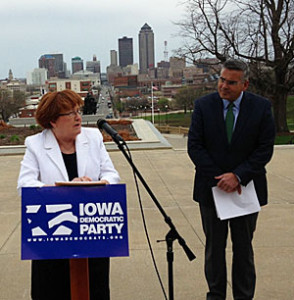 The Iowa Democratic Party is calling on the Republican U.S. Senate candidates who plan to attend a Friday night forum to boycott the event, because of its moderator. The event’s host suggests Democrats should wait ’til after the forum to offer their critique.

Erick Erickson,  moderator of The Family Leader’s forum, is a nationally-known conservative blogger and editor-in-chief of RedState.com who filled in as host of Rush Limbaugh’s program yesterday. Former Iowa Lieutenant Governor Patty Judge, a Democrat, accuses Erickson of pushing an “extremist…anti-woman” agenda.

“I’m concerned and troubled that GOP Senate candidates are providing Erick Erickson a high-profile platform this Friday,” Judge said this morning  during a news conference outside the statehouse. “…If they believe that they have to cater to hate and sexism, then they — the Republican Party — has truly lost touch with Iowa families.”

“I think it’s very curious that the woman in this race would be comfortable in that forum setting, knowing the views of the moderator. I think that alone would be enough to give her pause and for her to reconsider her decision to attend,” Judge said. “It would be for me.”

Senator Matt McCoy, a Des Moines Democrat who is one of two openly gay members of the Iowa legislature, said it’s “highly discouraging” the GOP candidates would stand with Erickson.

“Someone who makes a living off of hatred and homophobia,” McCoy said. “…According to Erickson, LGBT Iowans are definiately, and I quote, ‘on the road to hell.'”

Bob Vander Plaats, the president of The Family Leader, said his organization “is thrilled” to have Erickson as the moderator.

“He will go beneath the surface of talking points to find out not only what a candidate believes, but why does that candidate believe what they believe,” Vander Plaats said during an interview with Radio Iowa. “The candidates will be the news. Erick Erickson will only get the answers that make the news from the candidates.”

“I think instead of calling on people to boycott a debate or a forum that only gives them more information and more knowledge as they go to the polls, maybe they should allow us to do it and then critique us afterwards instead of telling people to boycott it beforehand,” Vander Plaats said.

Friday’s senate candidate forum will be held at the Faith Baptist Bible College in Ankeny. On Thursday night, all five Iowa GOP candidates for the U.S. Senate will appear together in a 90-minute “Iowa Press” special to be broadcast statewide on Iowa Public Television. On May 3, the Iowa Broadcast News Association will host a candidate debate in Cedar Rapids.