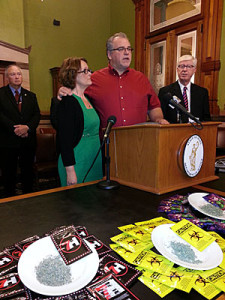 The state’s top law enforcement official today announced what he calls a first-of-its-kind consumer fraud lawsuit. Attorney General Tom Miller says the action marks a new approach in the fight against the sale of synthetic drugs.

The lawsuit follows a bust at a Des Moines convenience store in which a clerk sold “aromatic potpourri” to an undercover officer. “What the packages will typically say someplace is that (the substances) are not fit for human consumption, including inhaling. At the store, according to the lawsuit allegations, the clerk suggested they buy a glass smoking pipe to do the inhaling,” Miller said.

According to the lawsuit, law officers seized 960 packages of synthetic substances from the Shop ‘n Save store located on Des Moines’ northwest side at 4685 Northwest Second Street. Some of the packages feature pictures of Scooby Doo and Dopey from the Seven Dwarfs. 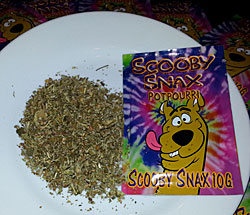 The civil lawsuit was announced at a statehouse news conference. Attorney General Miller was joined by a host of law enforcement officials, as well as Mike and Jan Rozga. The Indianola couple has been on a crusade against synthetic drugs ever since June of 2010, when their son David committed suicide after smoking K2.

“Anybody who knows anything, as far as these substances are concerned, understands all too well how these products are being distributed and sold and also the dangers that are also being associated with them,” Mike Rozga said. 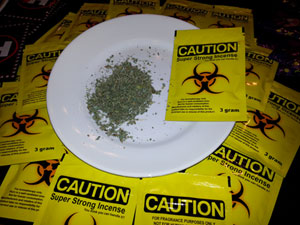 Des Moines Police Major Dana Wingert  said he welcomes the new direction being taken to the fight the sale of synthetic drugs. “The sale of the these substances has been under the guise of bath salts, potpourri, and other legal items when those distributing them know full well how they’ll be consumed and what the effects are,” Wingert said. “Their cavalier attitude toward the sale and distribution of these substances is an outward show of disrespect to the community and the families of all those affected by these substances.”

Miller said he expects to file similar consumer fraud lawsuits as police around the state target other sellers of synthetic drugs.