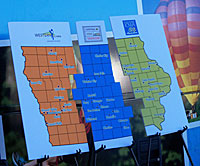 Map showing the 3 tourism regions in the state.

The leaders of the state tourism office and the three tourism regions are going on a bus trip beginning on May 2nd to highlight attractions across the state. Iowa Tourism Office manager, Shawna Lode, calls the eight-day tour the “Epic Iowa Road Trip.” “We’ll travel to 36 Iowa communities  and 33 Iowa counties. We’ll visit more than 60 places.  We’ll tell Iowans and our friends in surrounding states how they can enjoy those places as well,” Lode says.

Western Iowa Tourism Region Executive Director, Shirley Phillips, says they will start out at the West Bend Grotto before moving to Lake Okoboji and the “Legend” roller coaster. “And then we’ll go on and go to Cherokee, we head on to Lakeview for the night. We’ll be in Manning, will be in Elk Horn, we’ll be in Council Bluffs  we’ll be in Avoca, we’ll be in Harrison County. We are just gonna travel everywhere and we are gonna make sure that everybody understands the economic impact of travel,” Phillips says. They will end up in Sioux City on May 10th. 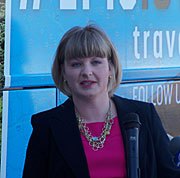 Ann Vogelbacher, the executive director of the Central Iowa Tourism Region, talked about that portion of the tour. “We will be at Market on Main, a new attraction in Ottumwa, we’ll also be featuring things like Dutch letters at Pella’s Tulip Time festival. Maytag Blue Cheese in Newton, and…homemade candies in Chariton,” Vogelbacher says. “We’ll showcase our racing industry that spans from go-carts to sprint cars to NASCAR. We’ll cap off our final day in central Iowa with a focus on all sorts of outdoor recreation activities.”

Eastern Iowa Tourism Association executive director, Carrie Koelker, says they’ll start their portion of the tour in Burlington and head all the way north to Nashua. “We’ll cover options from thrilling zip-lining, raging water parks and sky-diving. Adding some flair to the Chalk the Walk Festival in Mt. Vernon, unveiling the Herky’s on Parade in Iowa City, and unwinding in a relaxing winery and pizza parlor in the evenings,” Koelker says. 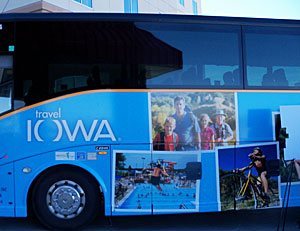 Tourism officials will travel on a bus decorated with pictures of Iowa attractions.

Lode says they advertise Iowa in surrounding states, but they also want to let residents know they can take vacations here too. “People  sometimes think when we say travel or tourism we mean getting on an airplane and going to a beach or another country. And that certainly is tourism — but we really define a tourist as anyone who goes more than 50 miles away from their home in one direction,” Lode explains.

She says they encourage people in each of the three state regions to take a look at some of the events and attractions in regions outside of their own. “You absolutely can live in central Iowa and go to that place that you’ve always wanted to go to because you’ve hear that they have great burgers,” Lode says. “Or head over to eastern Iowa and see something — because you didn’t know that you could sky dive in eastern Iowa — and we are going to show you that you can.    We want to show those hidden gems that people might not know about and help them learn how they take advantage of them.”

The Iowa Tourism Office will share updates, pictures and videos of the trip on Facebook, Twitter and other social media. The trip wraps up May 10th.