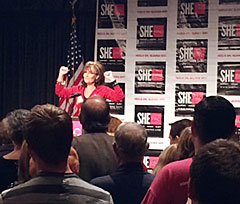 Former Alaska Governor Sarah Palin was in Iowa this afternoon to deliver her endorsement of U.S. Senate candidate Joni Ernst in person.

Ernst is one of five Republicans vying for the GOP’s U.S. Senate nomination and Palin announced a month ago that Ernst was her choice. Palin told the crowd gathered in West Des Moines that Ernst would not be “co-opted” by the special interests in D.C. and she urged Ernst supporters to go out and “brag her up.”

“Time is short. We don’t need a whole lot of touchy-feely, compassionate, ‘kumbayah’ singing around the campfire when it comes to these campaigns,” Palin said. “We need the fighters. We need you all to fight for the right folks that we need in D.C.” 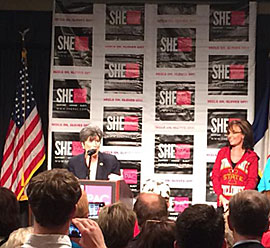 The newly-decorated Ernst campaign vehicle was parked outside the building where today’s event was held. It features the phrase: “Honk if you want to make D-C squeal,” continuing the theme of a campaign ad in which Ernst talks about castrating pigs as a farm girl.

“Coolest campaign bus in the nation. I think it’s gorgeous and it says it all, about castrating those hogs, you know…That ad that she put out, right. That right there,” Palin said, snapping her fingers. “I mean, it got people’s attention because it’s like: ‘Whoa! Nobody’s going to push her around.'”

Ernst thanked Palin for the endorsement, saying she’d be honored to be the first woman Iowa elected to the U.S. congress.

Photos courtesy of the Ernst campaign.