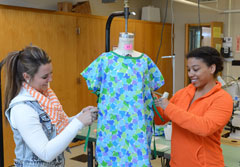 Students in an Iowa State University class have created a product that may be manufactured by the women inmates at state prison in Mitchellville. Brenda Ackerman’s apparel production management class was asked to help Iowa Prison Industries come up with a way to manufacture a child’s hospital gown. “So what IPI is actually receiving from the students is a manual, a basic operating manual for the production of the pediatric gowns,” Ackerman says.

Three sets of students had to take the design for the gown and figure out a process that would allow the prisoners to manufacturer them in a large quantity.

“The challenge was to make 20 gowns in less than two hours,” Ackerman says. “And in fact, two of the group achieved that in one hour and thirty-five minutes, approximately.”

Ackerman says this project had a little more incentive to it, as students learned its impact would go well beyond those who ended up wearing the gowns. “They actually did visit the facility in Mitchellville and it kind of opened their eyes to ‘hey we’re doing this for someone.’ They can actually use this manual to learn something to learn a skill and to learn a discipline that they maybe have never even done before,” Ackerman says. 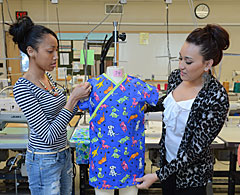 IPI has had collaborations with ISU in the past, with students working on landscaping at the facility and the school has furniture made by the prisoners on campus. Ackerman says IPI is now reviewing the student plan for the gowns to see if they will use it. “They’re looking into it, this is something I know that they’ve been wanting to do, so it’s just a matter of trying to set up the production area so that they can produce these gowns,” Ackerman says. She says the gowns would go mainly to state hospitals.

Clothing manufacturing is often thought of as a process of coming up with a popular design and them churning them out. Ackerman says this assignment made the students think about more levels of the process.

“Part of the garment industry, a lot of it is function, so it gives them a little bit different element to the design process. And also it gives them a good idea of what it takes to produce a garment,” Ackerman says. “It’s not likely that these students will end up working in a manufacturing plant — but at least they’ll know what actually goes on in these plants and how they are produced and all the things that actually produce a garment.”

The students donated their prototype gowns to a Des Moines hospital for kids to use as play items.