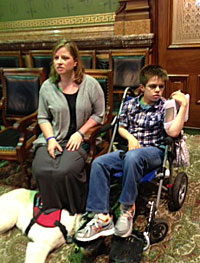 A Republican-led committee in the Iowa House has overwhelmingly approved a bill that would let patients with “intractable” epilepsy go out-of-state and come back with 32 ounces of cannabis oil as a treatment for their condition.

Republican Representative Clel Baudler of Greenfield has been a long-time opponent of legalizing marijuana for general medical purposes, but he urged the committee to pass this bill. “I believe today, right here, right now, we have an opportunity to do something that’s good,” Baudler said early this afternoon.

The bill passed the House Public Safety Committee on a 13-5 vote.

“My hope and my prayer is that this ‘hemp oil’ — I refuse to call it marijuana oil or medical marijuana, it’s hemp oil — I hope it works. I really do. I pray that it works,” Baudler said. “What keeps me up at night is the fact that next year or the year after, everybody will say, ‘Me, too,’ but they’ve been saying that for years and I’ve been catching all the spears.”

Representative Jarad Klein, a Republican from Washington, said the bill sends a “good message” to Iowans that the two political parties can “work together” to address problems.

“We have an opportunity here today to get government out of the way so that parents and their neurologists can come to a decision about what is best for their children,” Klein said.

Representative John Forbes, a Democrat from Urbandale who is a pharmacist, estimates about 100 patients in Iowa who are currently taking powerful prescription drugs that, ultimately, reduce their lifespan, will be able to get a recommendation from a neurologist for cannabis oil.

“Patients are able to reduce the prescription drugs they’re currently on by up to maybe 50 to 75 percent, which gives them a better quality of life,” Forbes said.

Karen Sales of Ankeny has an 11-year-old son with a chromosome abnormality that has caused his intractable epilepsy. William takes three different prescription drugs each day for his epilepsy.

“His doctors are actually waiting for this to pass so we can start our next course of action,” Sales told reporters after the meeting.

Last Thursday the Iowa Senate approved a bill to decriminalize “non-intoxicating cannabis oil” for the treatment of “intractable epilepsy.” The House committee has proposed a few changes in the legislation, changes which must be considered by the full House when the bill comes up for debate. The bill’s leading champion in the senate does not anticipate major controversy over the changes, but he wants more clarification about one change that would force the University of Iowa to conduct a study about the effectiveness of cannabis oil as a treatment for intractable epilepsy.