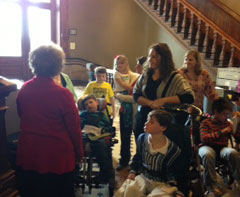 Mothers of children with intractable epilepsy lobby House GOP Leader Linda Upmeyer, (in red), to bring bill up for a vote that would decriminalize possession of cannabidiol.

After hours of behind-the-scenes negotiations, the Iowa legislature has approved a bill that would legalize possession of an oil derived from the marijuana plant as a treatment of severe epilepsy.

The bill passed the Iowa House shortly after 3:30 a.m. on a 75-20 vote. “We’ve been working on this bill an awful lot today,” Representative Jarad Klein, a Republican from Washington, Iowa, said. “Where we stand right now is I think that Iowans can be very proud. We’ve come together between the parties, between different factions, urban (and) rural legislators to put together what I believe is a good piece of legislation.”

Representative Bob Kressig, a Democrat from Cedar Falls, credited a small group of parents, mostly mothers, who have epileptic children for lobbying legislators day after day on this issue.

“What we’re offering today is hope for these families,” Kressig said.

Representative John Forbes, a Democrat from Urbandale who is a pharmacist, suffered from seizures during his childhood, but grew out of it and he said that’s why he has a “real passion” for the bill.

“We have the ability, I think, to make history, to do something for Iowans that will help them better their quality of life and help their families with quality of life,” Forbes said.

The lifespan of children diagnosed with intractable epilepsy is dramatically shortened not only by the condition, but by the powerful prescription and experimental drugs they take to try to reduce the duration and intensity of their seizures. Forbes estimated about 100 patients in Iowa with intractable epilepsy would be able to get a neurologist’s recommendation for cannabis oil as a treatment if the bill becomes law.

The Iowa Senate approved the bill to decriminalize possession of cannabis oil last Friday, but the House made some minor changes in the bill before passing it early this morning, so Senators had to review the bill again and vote to approve the alterations. Senator Joe Bolkcom, a Democrat from Iowa City, urged quick passage.

“I think they’ve done some good work to improve the bill,” Bolkcom said.

One House change requires patients to get an Iowa neurologist’s recommendation for cannabis oil.  The original Senate version allowed neurologists in any state to make that call for Iowa kids with chronic epilepsy. Shortly after 4:30 a.m. this morning the Senate approved the final version of the bill on a 38-8 vote and sent the legislation to the governor.

The action is among the final decisions made during the 2014 Iowa General Assembly. The House passed a resolution to mark the end of the legislative session shortly after 4 a.m., but House leaders are waiting to formally adjourn until senators take their final votes.