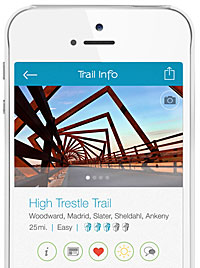 A website and mobile application that provide an interactive map of bike trails in central Iowa is being now available. The free app is being released by the Iowa Natural Heritage Foundation (INHF) and spokesperson Hannah Inman says it’ll be expanded statewide in time for RAGBRAI in July.

“This app is pretty neat because it’ll have all 1,800 miles of trails in the State of Iowa on it,” Inman says. “You’ll be able to geo-locate yourself and follow yourself on the trail, keeping track of your mileage, how fast you’re going, and what trails you’ve completed.”

The INHF is also working with local communities across the state to build “points of interest” into the app. “As we do that, you’ll be able to find the hidden gems, the great businesses along the trails, as well some cultural, historical, and natural resource information that are unique to the trails,” Inman says.

Private donates and grants have helped pay for the development of the “Iowa By Trail” mobile app and website. Inman says it’s cost about $200,000 and there’s more to raise. “We have fundraised for the marketing, the content creation, the Apple, and the website version. Now, all we’re doing is fundraising for the Android version and we’re hoping that will be completed and out this fall,” Inman says. The West Des Moines-based company Shift Interactive created the “Iowa By Trail” app.