You are here: Home / News / Winter stress showing up in some Iowa trees 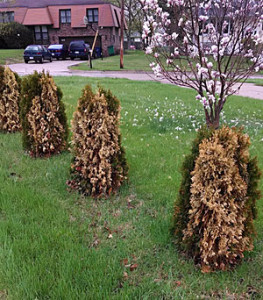 Winter stress is showing up in some trees in Iowa in the form of brown needles.

The rain is causing most plants to green up, but you may notice your pines, firs and spruces with branches that are turning brown or yellow. Iowa Department of Natural Resources forestry expert, Tivon Feeley, says the trees known as “conifers” are showing winter stress.

“The ground is still frozen and the root system can’t take up the water, but the ambient air around the tree is warm enough where the tree is still using the water — it is respiring the stuff that’s in the needles. And the tree essentially just dries up,” Feeley says.

The trees are normally green year round, so it’s very noticeable when the problem happens. Feeley says the fate of the tree branches depends on the severity of the problem. 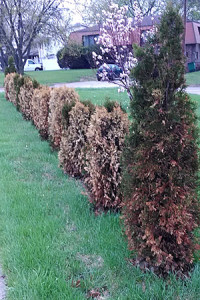 Frost in the ground combined with warmer temperatures has caused some winter damage to conifers.

“It can be permanent, it really depends. The buds on the end of the tree — if they’re not damaged — the tree can come out of it,” Feeley says. “But the needles that have browned up right now — and that might brown up over the next couple of weeks as we warm up again — those will be permanently lost.”

Some varieties appear to be hit worse than others. “Arborvitae, white pine and white fir — those are the ones we are getting the most calls on. But all conifers are susceptible to it,” Feeley says.

There is no way to prevent winter burn, but Feeley says you can reduce the risk by properly mulching and watering in the fall prior to the tree going dormant.