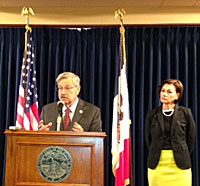 Governor Terry Branstad is not giving many hints about whether he’ll approve or veto two high-profile bills that cleared the legislature in the past week.

Both the Senate and House overwhelmingly approved a bill that would legalize possession of an oil derived from the marijuana plant, as treatment for severe epilepsy.  Branstad says he’s against allowing patients to smoke marijuana as treatment for ailments like glaucoma, arthritis or post traumatic stress, but this bill only deals with a non-intoxicating oil.

“A lot of work went into this in the closing weeks of the session and I have talked to both the governors of Alabama and Utah that passed similar, very limited pieces of legislation,” Branstad says.

“Obviously, this is something that’s been negotiated between the different groups and I feel my responsibility is to protect the prople of Iowa and the integrity of the state,” Branstad says. “I will carefully review and consider it. I’ve not made any decision on this.”

The cash comes from the casinos. No taxpayer dollars are involved, but Branstad says it’s a “huge” pay-out for the Iowa greyhound industry.

“There was very little discussion on this during the legislative process,” Branstad says. “I also believe that Racing and Gaming Commission wil have an important role to play in how these huge amounts of resources are allocated.”

The casinos in Council Bluffs and Dubuque have complained they’re providing an annual subsidy of $13 million to keep greyhound racing going at the two tracks, while few patrons wager on or attend the races.