You are here: Home / News / Emergency management chief urging Iowans to be wary of bad weather 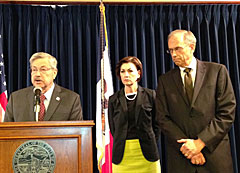 After two Iowans died last week in a tornado, the state’s emergency management director is urging Iowans to sign up for weather alerts and pay attention to stormy conditions.

“I, too, want to express my condolences to the families of those who lost their lives in Keokuk County during the recent storm events,” Mark Schouten, director of the Iowa Homeland Security & Emergency Management agency, said this morning. “Their deaths underscore the fact that severe weather can be dangerous, unpredictable and something that we need to take seriously.”

Schouten was invited to speak today at the governor’s weekly news conference. He touted a new National Weather Service app for smart phones.

“The big difference in the weather information you can get today is that it is localized,” Schouten said. “And you can rely upon it, so if you hear this strange ring tone on you cell phone, it’s probably a National Weather Service alert telling you that there is a tornado warning in the area where you are at, at that time.”

However, Schouten told reporters the tornado that hit the Keokuk area on April 27th was not detected on weather radar.  The two women who died last week were in barns that were hit by a tornado. The first woman who died was in a barn that collapsed in Kinross. The other barn was in Hedrick and the woman found there died a few days later. The two towns are about 35 miles apart.