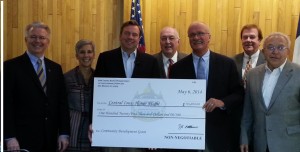 Plans are in the works to send 130 Korean War veterans from Iowa to Washington, D.C. to see monuments built in their honor.

The Polk County Board of Supervisors today awarded a $125,000 community development grant to the Central and Western Iowa Honor Flight organization, led by Jeff Ballenger of Council Bluffs. “We’ve been taking flights since 2007 and have taken roughly 2,300 mainly World War Two veterans (to Washington, D.C.) from central and western Iowa,” Ballenger said.

The honor flight for Korean War vets is scheduled to take place on September 30, with a pre-flight dinner on September 29 at Veterans Memorial Auditorium (Community Choice Credit Union Convention Center) in Des Moines.

Ballenger has been on 12 honor flights and says the veterans greatly appreciate their time in the nation’s capital. “I’ve actually been to some funerals of our World War Two veterans who’ve passed away and some of them have been buried in their shirts from the honor flight, so that’s what this program means,” Ballenger said.

The veterans who travel to Washington, D.C. on September 30 will visit Arlington Cemetery as well as memorials to the Korean War, Vietnam, and World War Two.