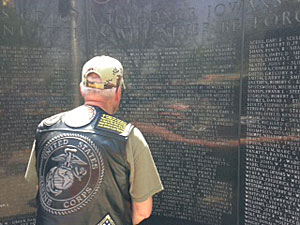 A Vietnam veteran looks for the names of fallen comrades.

Nearly 300 people gathered around the Vietnam War Memorial on the statehouse grounds late this morning to observe “Iowa Vietnam Veterans Recognition Day.” This year’s ceremony marks the 50th anniversary of the conflict’s start.

“All of us here today have our own individual stories, each story unique unto ourselves, yet our experiences are the same in many respects,” Myers said. “Some of us are multi-tour veterans. Some of us paid a severe price for our service and the wounds incurred, both visible and invisible, and some, like the names on this wall and the wall in Washington, D.C., made the ultimate sacrifice.”

Myers was drafted into the military in 1966 and did a tour of duty in Vietnam.

“As I reflect back on the war of 58,000 killed, 300,000 wounded, nearly 2400 missing in action, let us all take pride in having stood up many years ago and taken the oath while others walked away,” Myers said.

Myers spoke of the protests against the war during the Vietnam era and the less-than-welcome reception he and other soldiers received when they returned from southeast Asia.

“As I look back at that time, I’m convinced it would have been easier to burn your draft card and join the counter cultural movement. After all, ‘making love, not war’ seems like a good idea to most people, don’t you think?” Myers said. “…I believe all of us today did the honorable thing by either joining the service or answering the call of duty. I felt that way when I was 19 years old and I feel that way today at the age of 67.”

Bill Zieser of Leland, president of the local Vietnam Veterans of America chapter, served in Vietnam in 1967 and ’68 and he was part of the color guard for today’s event.

“It brought back some memories,” he said. “Some good memories and some bad memories.”

The ceremony on the statehouse grounds closed with a 21-gun salute, the playing of “Taps” and the singing of a hymn. Iowa Vietnam Veterans Recognition Day was established seven years ago and this year’s crowd was the largest ever for the event. Many stood at the Des Moines memorial’s granite wall after the event was over, looking for the names of Iowa soldiers killed in action during Vietnam.