You are here: Home / Health / Medicine / Mariel Hemingway to visit Iowa for forum on mental health 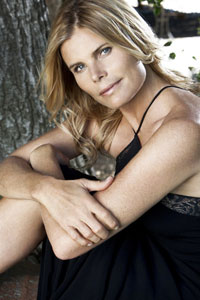 Academy-award nominated actress Mariel Hemingway will visit Iowa one week from today to speak at an event on mental health awareness. Hemingway is the granddaughter Nobel Prize-winning writer Ernest Hemingway. In an interview with Radio Iowa she says it took her awhile to decide to speak out about mental illness in her family.

“You know, I wish that there was like one epiphany that I had on the mountain top, or I fell down or something,” Hemingway says, “I’m unfortunately not the girl that learns things kind of  quickly. It’s been a lifetime process of really understanding why I made the choices that I’ve made.”

She says she had been working on suicide prevention, but a friend encouraged her to tell her family’s story. Hemingway says she found the right director and that led to the documentary “Running From Crazy,” written from her perspective, about her family’s struggles with suicide, depression, alcoholism and more. From that she realized she had a a passion to share the story with everybody.  “I can because I think people really want help with mental illness because there’s just still too much stigma surrounding the issue. And people are scared and people want help,” she explains.

Hemingway sees progress in changing attitudes after speaking recently a the Council on Mental Health in Washington, D.C. “And they are very focused on the real fact of lifestyle being a big component, meditation having a huge affect on brain balance and wellness — so that’s really exciting,” Hemingway says. She says mental health has gotten more attention recently in connection with the shootings nationwide.  “People are starting to understand that…the different shootings with these kids have more to do with medication…it’s not a gun issue, it’s a really mental health issue. So it’s all of that, all of that is coming to light now,” she says.

Hemingway says she’ll tell her story in her appearance in Des Moines and talk about how people can find a way to deal with their mental illness using a holistic approach.

“And that doesn’t mean that you don’t get help. It doesn’t mean anything specifically,” Hemingway says. “but it means we do have answers for our own balance and well being or family members if we take the time to  really discover what those are. And it’s a journey, it’s like giving people permission to figure this stuff out on their own given tools — given the right tools.”

Hemingway says she also will let people know that they are not alone in dealing with the problem and more positive things are ahead. “I talk about how everybody is so really ready for this, because I really think this issue is on the tipping point, you know I think it’s about to explode. I think it’s no longer going to be so stigmatized,” Hemingway says.

Hemingway will be the keynote speaker at the event which is part of what’s called the “Me-series” put on by Broadlawns Hospital. The event will be held at the Community Choice Credit Union Convention Center at the Iowa Events Center. Tickets start at 27 dollars 50-cents and proceeds go toward increasing mental healthcare services in the community. Tickets may be purchased online at www.BroadlawnsAdvocateCircle.org, or by calling  the Iowa Events Center Ticket Office at 515-564-8300.