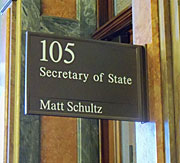 Republican Matt Schultz, Iowa’s secretary of state, has released a report indicating his two-year-long investigation has found evidence to suggest 117 ballots were illegally cast in Iowa’s 2010 and 2012 elections.

Only 27 people have been charged with voter fraud. More than half of those were felons who did not apply to Governor Branstad to have their voting rights restored. Schultz used federal grant money to hire an agent from the Iowa Division of Criminal Investigation to review alleged cases of election misconduct.

So far six people have been found guilty of voting fraud and four cases were dismissed. Another case went to trial in southeast Iowa and the voter was found not guilty. Schultz says the investigation found 74 instances in which non-citizens had registered to vote, but didn’t actually cast a ballot.

“We launched the investigation because we had evidence that there was a possibility that people were voting who were not eligible to vote and, specifically, when we had matched our voter registration records with the DOT records of people who had identified themselves as non-citizens, we had a match of more than 3500 people who were registered and more than 1000 who had cast a ballot and so we wanted to try and figure out what was going on,” Schultz says.

In addition, another 100 cases of possible “double” voting may have been uncovered by checking a database of voting in 28 states, including Iowa, and those cases are being turned over to county officials.

“These cases that we’re referring to local law enforcement are individuals who voted in Iowa and in another state who the same first name, last name, birthday and last four digits of their Social Security number,” Schultz says.

Critics have said Schultz should not have financed his investigation with federal grants intended to enhance voting. Others are now suggesting with just a handful of convictions, Schultz has not proven voter fraud is a rampant problem. The League of United Latino American Citizens and the American Civil Liberties Union of Iowa sued, accusing Schultz of trying to discourage minorities from voting.

Iowa allows one of the longest periods of absentee or “early” voting of any state in the nation, plus voters may register at the polls on the day of the Primary and General Election. Schultz says county auditors have flagged 682 possible Election Day registration “irregularities” on November 6, 2012. That group of last-minute Iowa voters did not respond to follow up requests from their county auditor to confirm a home address and other information included in the voter registration rolls.

Schultz was elected Iowa secretary of state in 2010 and he is not seeking reelection. He’s running in a crowded primary for the Republican Party’s nomination in Iowa’s third congressional district.