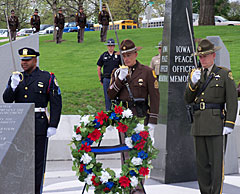 Law officers from around the state gathered on a cool windy day west of the state capitol for the annual ceremony to honor their comrades who were killed in the line of duty.

Department of Public Safety Commissioner, Larry Noble, told the visitors at the event they could look around and see law officers that are “ordinary people who do extraordinary things.”

“We see officers who are on the front lines fighting crime and keeping our communities safe and sound,” Noble says. “You see the heroes who very humbly put their lives on the line each and every day so that we can go home safely to our families.” Governor Terry Branstad also spoke at the site of the Iowa Peace Officer Memorial. 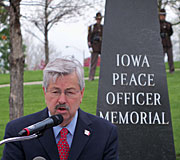 “We are here today at this location for this very solemn ceremony to recognize that some of our law enforcement officers have made the supreme sacrifice to protect the safety and well being of all of us — the citizens of this state,” Branstad says.

The most recent officer to give his life in the line of duty was Jamie Buenting of Rockwell City. Buenting was shot to death on September 13th of last year by a man who was wanted on a felony warrant and refused to come out of his home. Police say Corey Trott fired a single shot that struck and killed Buenting. 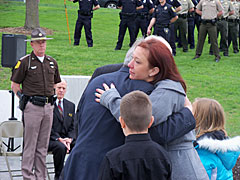 Buenting’s wife Mandy, son Ethan and daughter Kalie were on hand and Branstad recognized them. “Especially today, we honor and recognize the life of Jamie Buenting and to express our condolences and support for his family,” Branstad says. The governor presented Mandy Buenting with a flag and hugged her, and spoke with the children.

Three other officers were recognized during the event: City Marshal Reuben Fenstenmaker of Farmington died January 1st of 1868 by a man who was arrested for horse stealing; City Marshal Robert Coulter of Farmington was shot and killed December 21st of 1902 by a man he was attempting to arrest; Town Marshal Joseph Kashmetter of Alton was killed by two armed men near the town depot after stopping them on March 27, 1911.

The Peace Officer Memorial was moved to the new location between the capitol and the Department of Public Safety building in the fall of 2012. It had previously been located east of the capitol.