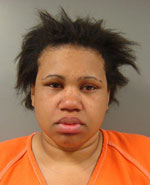 Fort Dodge Police Friday morning arrested a woman following an incident at a residence in the city. Upon arrival, officers found 19-year-old Marcquis Dewain Collier of Fort Dodge in the front yard after he was stabbed in the chest.

Collier was transported to a Fort Dodge hospital where he later died of his injuries. Based on an investigation, officers were able to identify 24-year-old Vanita Briann Daniels of Fort Dodge as the suspect. Daniels was charged with Voluntary Manslaughter.