You are here: Home / News / Branstad not commenting on legislators who bring guns into capitol 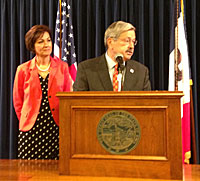 Governor Terry Branstad says he feels safe in the statehouse and will not “second guess” legislators who have brought their concealed weapons inside the capitol.

The public must pass through metal detectors at the building’s ground floor entrances and weaspons are not allowed in, but last week two senators who have swipe cards to bypass security revealed they have carried guns into the capitol.

“I understand and accept the fact that the legislature has its own rules and I understand the separation of powers, but I can tell you the lieutenant governor and I feel very safe and we fell that public safety does a good job protecting our capitol,” Branstad said this morning during his weekly news conference.

Branstad got into a turf war inside the capitol shortly after he became governor in 1983. Branstad ordered the removal of cigarette machines from the building, a move which angered smokers in the legislature who exerted their influence to keep the machines in space inside the capitol which is under their control. In 2014, Branstad’s not saying how legislators should decide this pistol-packing issue.

Branstad told reporters today that none of his office staff carry weapons into the building, although state troopers are on duty 24/7 to provide security for Branstad.